Our commit message conventions are different depending on the type of commit we are documenting. Recall that in our workflow we work on an issue by pushing many small commits to a feature branch associated with a merge request. These small commits often contain incomplete implementations, experiments, unpolished work, and even flaws. Eventually the work in our feature branch is ready for review, and we request a review. Based on feedback, we further refine our work by pushing more small commits to our feature branch, and then we request another review. This continues until the reviewer(s) is satisfied, at which point the merge request is merged into upstream's master.

TIP: We keep our merge requests and their corresponding feature branch short-lived. The shorter the better. Ideally 1-2 days. Keeping them short-lived reduces the risk and size of integration conflicts. We keep them small by working hard to find simple solutions and breaking down larger problems into many smaller problems.

Sometimes as we work on an issue, other merge requests may be merged into master. When this happens we must integrate those changes into our work by merging upstream's master into our feature branch. When we do, three scenarios may occur.

In the workflow described above, we can classify commits into three kinds:

Feature branches, and their associated pull/merge-request and issue, are used for development. As we work on an issue, we make many small commits to the feature branch. These commits often are not perfect. They may contain partial implementations, experiments, unpolished work, and even flaws. As we work, we push more small commits improving on our previous commits. We continue this until the work is complete and until our reviewers are satisfied.

As we work on an issue, we commit and push many small commits to a feature branch, which automatically updates a pull/merge-request that is associated with that feature branch. These commits aren't always perfect. They may contain partial implementations, experiments, and mistakes. We fix these imperfections in still more commits pushed to the same feature branch.

For feature branch commits we make a best effort to write good commit messages, mostly to remind ourselves what we did. They are often short and incomplete. However, there are a two elements of these commits that are very important.

These are needed to maintain the integrity of the licenses used by this project.

If we do not have to resolve conflicts then the we simply use the default commit message provided by git. Nothing more is needed.

If we have to resolve conflicts then, we must provide a Signed-off-by line and Co-authored-by lines as we do for feature branch commit messages. It is also sometimes useful to provide some explanation about the conflicts we resolved. 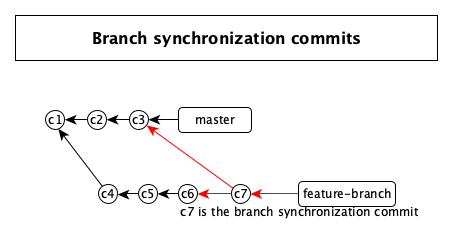 As we work on a merge request, we use its title and description to draft, review, and revise the final merge commit message.

The scope is optional. The scope is typically some component or feature of a system (e.g., db, css, login, search, reports, etc.). These are project specific.

The description should be imperative, descriptive, and no more than 50 characters.

The body of the commit message must describe the change that was made and why it was made.

The footer section must contain one or more of the following lines. 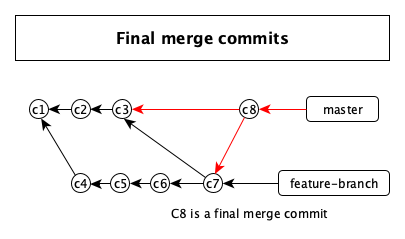